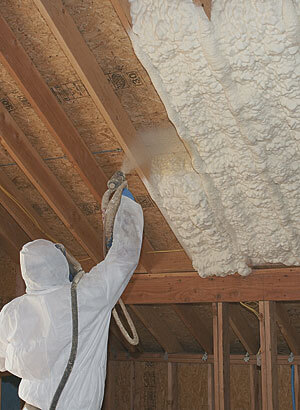 Spray foam insulation is developed from 2 types of composite material, polyurethane, and isocyanate. When combined, the 2 materials chemically react to expand and harden. During the insulation process, the 2 materials are sprayed at the same time from the tip of a spray foam gun allowing them to expand and form a protective layer of spray foam insulation over a designated area. Spray foam is widely promoted as a green building material for its ability to improve energy efficiency. It insulates better than fiberglass or cellulose leading to major heating and cooling cost savings for a homeowner.

There are 2 types of spray foam insulation – open cell and closed cell. Open cell is less expensive in general but it has a lower R-value per inch (3.6 compared to 7) so a thicker layer is often required. It is permeable to moisture and impermeable to air and has an effective sound dampening effect.  The closed-cell provides a higher R-value per inch and adds structural strength to wall, ceiling, and roof assembly. It stops both air and moisture. While all spray foams contain petroleum-based chemicals, some manufacturers have ‘greened’ their formula by reducing the percentage of petroleum-based chemicals in their polyol resin component and replaced that with

Building Energy has been using a non-toxic soy-based foam for almost a decade.  This is a safe, environmentally friendly foam with the highest R-values and quality.  HEATLOK SOY®, a closed-cell Spray Polyurethane Foam Insulation, has a unique ecological benefit that recycles plastic waste into a Rigid Spray Polyurethane Foam. This helps to more efficiently utilize the world’s nonrenewable resources. HEATLOK SOY® can reduce excess waste and energy consumption in buildings by up to 50%. This is an excellent closed-cell spray foam insulation/air-barrier used in areas where relative humidity levels exceed 55%.

For more info, Get in Touch!

Have a question? Send us a message!